Thank you for the music

The large wave flume is a unique facility and thus the experiments conducted there are unique as well. Over 30 years since its opening mean that it has seen a lot and the FZK team can draw from a lot of experience. But still, there are things that happen for the first time ever. In our case, it was the music that was playing from a speaker that we took down to the platform every afternoon when we did our measurements. As someone from the FZK team said: in the past, engineers would just go down and get the job done. Well, biologists also want to get the job done, but they realise that the job at hand is much more fun with the RESIST flume playlist running in the background.

We produce a laser show every day (though not quite disco style…): We are using a laser scanner that gets fixed to one of the cranes to map the surface of our pallets and from comparison between recordings we will calculate height differences and thus measure erosion. The approach is similar to the structure from motion images that we are taking, but given that questions about soil stability are at the centre of these experiments we cannot have too much data on it. To match images from laser scans of different days, white spheres are mounted on the side of the flume, which will appear on each scan and will be used to align them. And to get the highest precision possible, the FZK team build a calibration board that we placed in the flume and scanned in addition to the plant pallets. 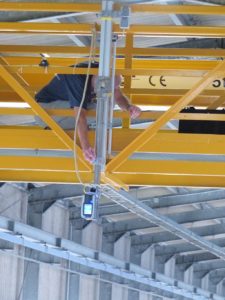 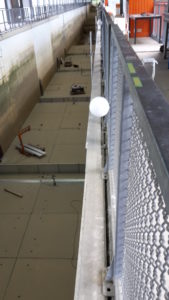 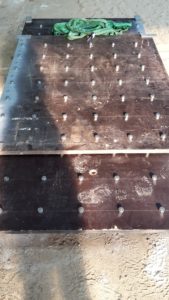 Unfortunately, this laser is so strong that is can damage eyes, which is why our laser show has to take place once the music and all people have left the flume.

This entry was posted in Uncategorized. Bookmark the permalink.